Bayanihan (pronounced as buy-uh-nee-hun) is a form of communal work practiced in the Phillipines. The word means “being in a bayan”, which in turn means nation, town or community in Visayan language (or Tagalog?). Bayanihan refers to the spirit of communal unity, work and cooperation to achieve a particular goal. 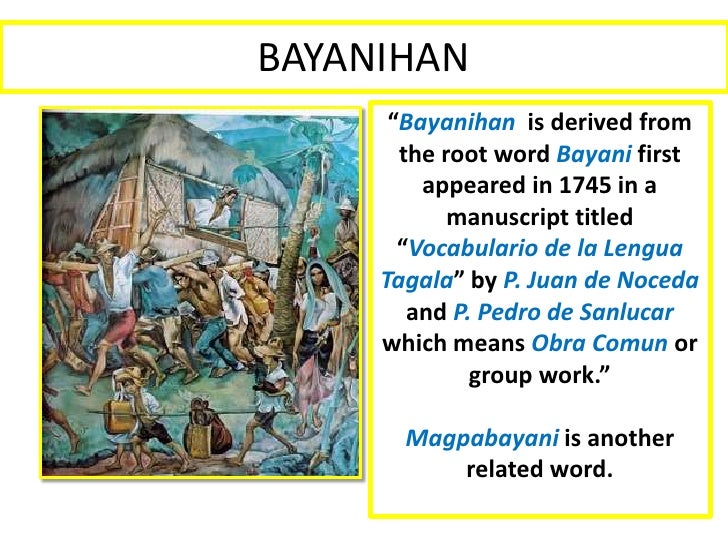 For instance, (especially) men of the community volunteering to move a traditional house to new location. Though no longer commonplace, this has become a traditional symbol for the concept of bayanihan. About 15-30 volunteers are carring the house to the family’s new place (see video below). The house owners Practice Gentle Reciprocity and serve food to the volunteers at the end of the move.

YOUTUBE ZgFYYkW1Ido Moving a house from here to there. Together. Panglao Island, Bohol, Philippines, 2008

The concept applies to the traditions in the rural areas of the Philippines, where people are asked to lend a hand to a family who will move into a new place. Just as people, especially students or younger generations do today in Europe. The difference is, that a relocation in the Philippines involves the entire house. This, of course, is only possible, because a traditional Filipino house (Bahay Kubo) is made of bamboo and nipa/anahaw leaves. 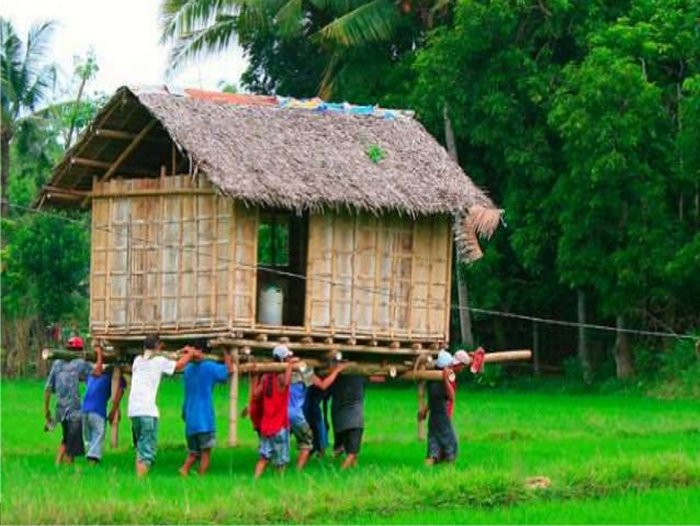 The Bayanihan spirit shows Filipinos’ concept of helping one another most especially in times of need without expecting anything in return. (Imelda Yumul)

In 2012, the context of facing natural desasters (wiki

), columnist Ordoñez, who defines bayanihan as a genuine service to others—pagiging makatao" observes:

When we’re faced with calamity, “bayanihan” emerges. But the bayanihan today is not the same as the bayanihan of yesterday. We seldom carry a neighbor’s nipa hut anymore, but we constantly carry the spirit of bayanihan.

On the other hand observers call for not romanticizing indigenous strategies. Yvonne Su and Ladylyn Lim Mangada write in 2016:

while bayanihan was once a principle that was believed to be upheld by the whole community, its contemporary expression is often on a much smaller scale, from neighbour to neighbour, and only for a brief period during crises. [---], despite its popular use after disasters, calling on communities to evoke bayanihan is often an inadequate answer to the need for collective action that commonly exists in post-disaster recovery.

Nico Ordoñez (2012): When we are faced with calamity, bayanihan emerges, html